BITPHORIA, The Game Itself

It occurred to me that most of what I write about on this blog has been the technical side of my thoughts and ideas while working on my game BITPHORIA. I haven't really been posting much in the way of actual progress on the game itself.

I thought I'd take a moment to share what is going on with BITPHORIA. As of now, by my estimation, the game engine is 80% done, and the game itself is roughly 15% completed. I am currently on the cusp of moving from working in the engine to working in the default game scripts.

I have spent a long while tweaking the visuals over the months, and trying out different little tricks, in an attempt to refine the overall appearance of the game into something that is stimulating and attention-grabbing. My entire philosophy on anything is to make it so visually appealing that anybody who sees a screenshot will automatically find themselves looking for a video, and anybody who sees a video will want to play the game.

If BITPHORIA doesn't captivate, visually, through a screenshot, then something needs to change. I don't want to make a product that isn't good enough to sell itself. 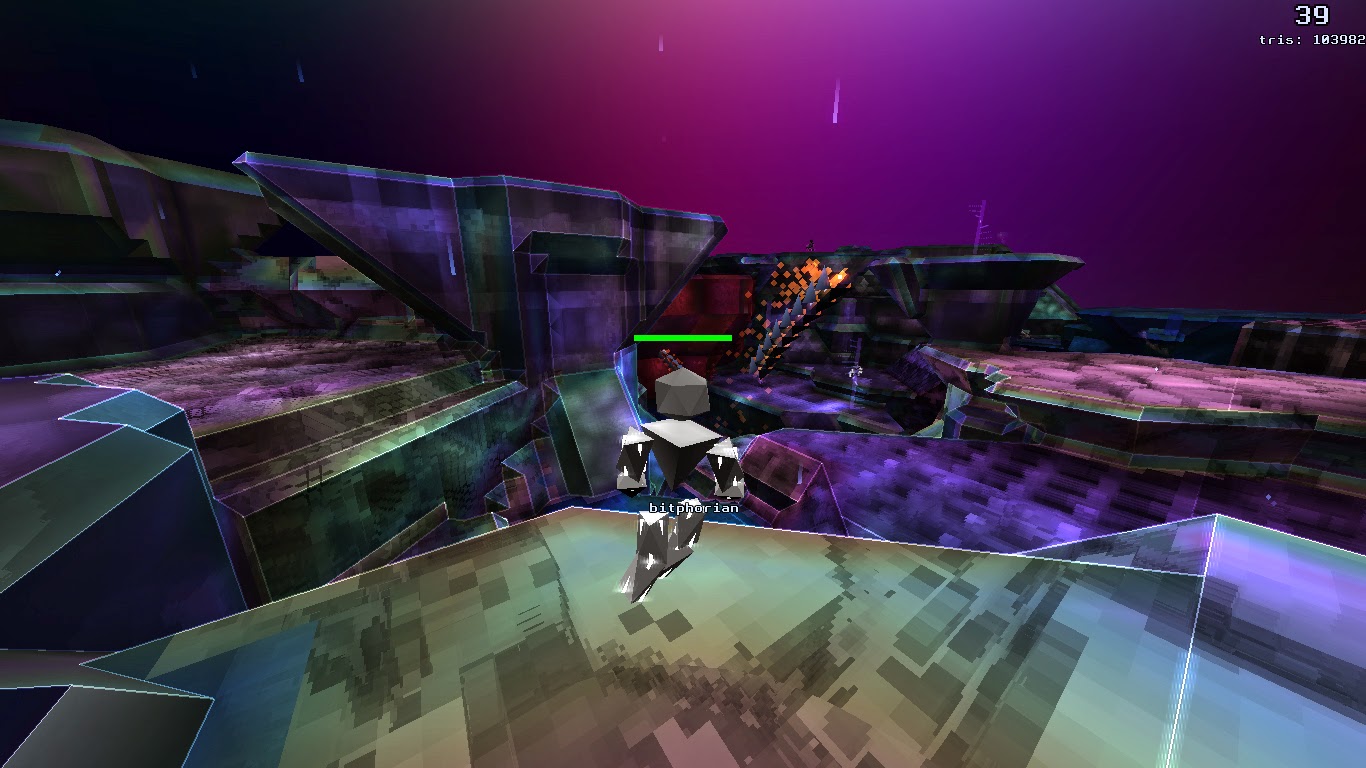 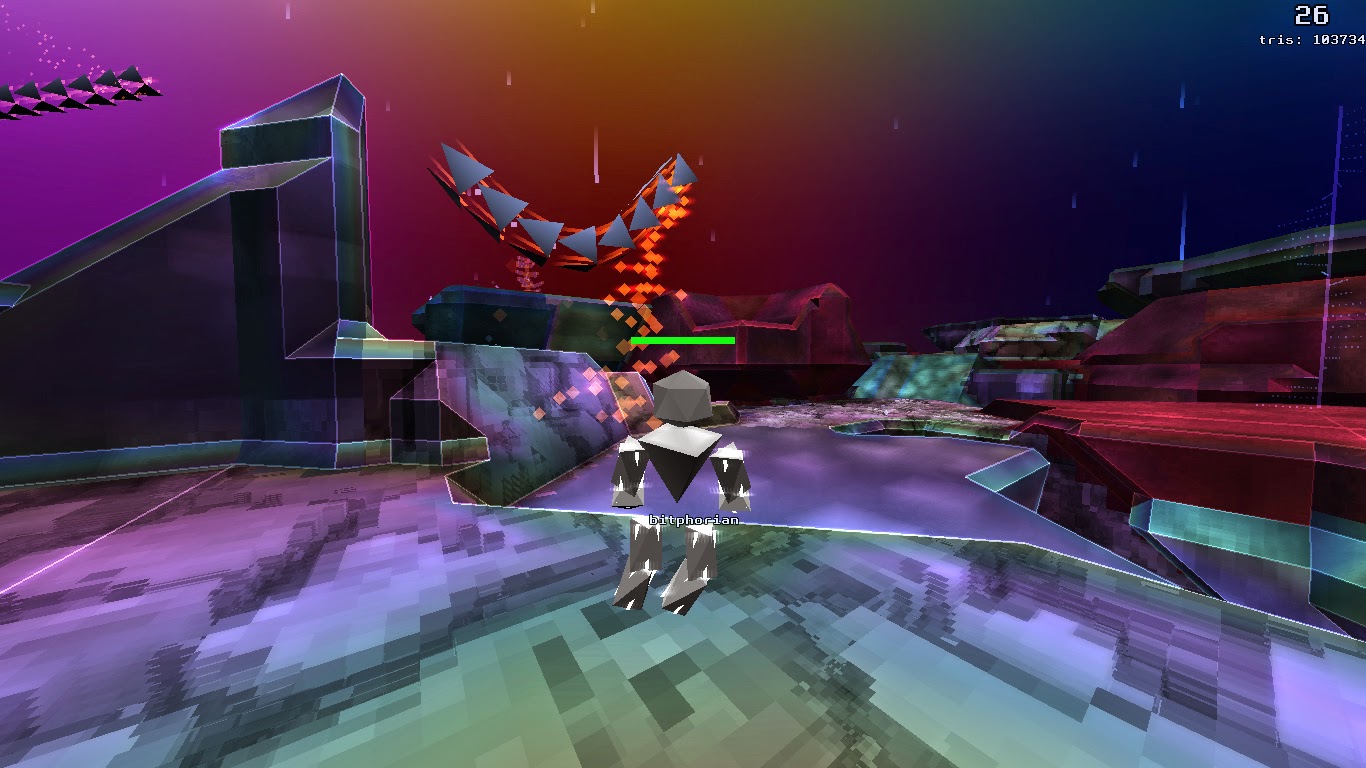 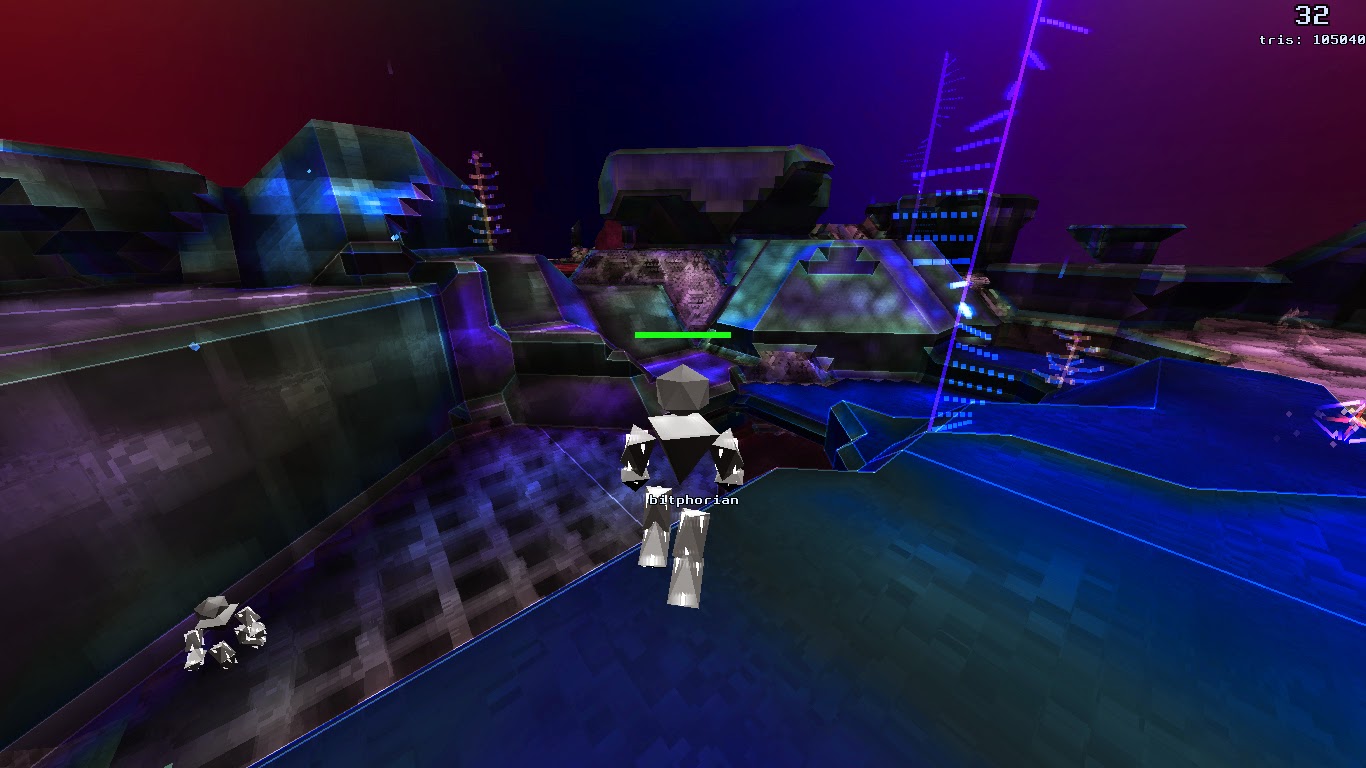 I think that these screenshots portray the overall aesthetic and graphical design of what the final game will consist of. You'll probably notice the low frame-rates that my netbook achieves. It's playable on here, but you will want something with a half-way decent GPU to perform the raymarching on the 3D texture materials. There will be options to reduce the demand on the GPU so that it will be smoother for players with budget/older hardware.

The scripting system is mostly in place. There are a handful of features that I aim to implement to expand functionality further, but the majority of all the commands for scripting each system are present and operational. There is still a lot of validation and verbose warning/error stuff that I need to go back in and write in there, to help aspiring mod developers along.

Documenting the sets of commands for each system is another task that is needed. I am not sure about when this will happen, because I intend to do most of the scripting for the game myself, and so it isn't something I have a need for until the game is released. Until it's released, I am really the only person who will be using it, and I'd like to finish BITPHORIA as soon as possible.

Netcode is operational. Players can start a server and it can be joined from another machine, on a LAN, or over the internet. There is no server-browsing in the menu yet, but that is on the todo list, which goes along with other menu UI features I'd like to add in for various things. One in particular is a sort of holographic preview of the world-volume that would be generated from the current seed value. As a server admin adjusts a slider for the seed value it updates the preview of the world so the user can get an idea for the type of layout that their game will offer other players who join in.

I have a good number of sound effects already in there that I have produced on my own, some of which have yet to find a use. There are 23 different sound effects, and only about half of them have found a place in the current scripts. I feel that I will use up the leftovers and need to make some more sounds before all the sounds are done.

I have also produced several 2-minute looping music tracks, that suit the general low-fi 8-bit aesthetic that underlies the graphical style of BITPHORIA. I'm not sure if all of them will make the final cut, and I'm not sure if server admins who start a game will be able to choose one themselves or if one will be randomly chosen based on the seed value for their game.

Because of the way the scripting works, where a set of scripts defining one game 'mode' is kept in a folder with the name of that game mode, users will be able to duplicate a game script folder and use it as a base for their own modded game mode. The scripts are relatively simple script files, and all that is needed is the documentation for the various commands that each scripted system utilizes. Anybody will be able to edit their script files to customize their game modes, or just create their own new one from scratch.

When someone has produced a BITPHORIA mod, there is no need for other people to manually download and install anything to their BITPHORIA installation. You simply see what game mode servers are playing in the server browser, and automatically download and run the mod when you join in. Infact, no scripts are loaded when you join a server, you only execute whatever scripts the server executes. This allows complete modding freedom. Anybody with BITPHORIA can play your mod, instantly.

If someone wanted to run their own server using a specific mod, they would need to manually download and install the mod scripts. This could change, I may set it up to allow servers to have the option to 'allow mod copying' for clients, at which point the server would let clients download the actual script text files and save them to their game for later use.

All of this is working, the game is currently playable as a simple little deathmatch game. The UI is vastly incomplete, there are no options for setting up a game, or joining a game. The menu system is started, but not currently 'fleshed out'. It is merely a framework with some minor functionality to traverse menu hierarchies using buttons. There are also nice little editboxes for editing configuration strings :)

I started the code base for BITPHORIA exactly a year ago today. It has just over 16k lines of actual code (not counting comments or whitespacing). I have never written 16k lines for one project in my life, nor have I ever worked for a year straight on one project. I have high hopes for BITPHORIA, not as something that will make me rich and famous (although, one can hope), but as something that the gaming industry takes notice of. I figure, at the very least, it will serve as a good portfolio piece if I ever breakdown and decide to get a job working for someone else (ughh).

I feel I have something valuable to contribute to gaming, as a whole, as well as anybody who aspires to make games or learn programming. I just want to be as valuable a resource as I possibly can, whether that means as a provider of fun and interesting games, or creative inspiration.

I hope people find my ideas as intriguing and enjoyable as I do making them come to life.

Posted by deftware at 9:18:00 PM
Email ThisBlogThis!Share to TwitterShare to FacebookShare to Pinterest